Whitney contacted me a few months ago about doing some photos of her and her painted baby bump. Morgan Webb does a fantastic job and Whitney had even chose her own painting. I was a little nervous about what the weather could possibly be in mid-January but it was 70+ degrees for the first time in weeks. I arrived a few minutes early to get some photo’s of Morgan putting on the finishing touches. Whitney, Jason and I headed out for some urban and rural locations in Springfield and focused mostly on Whitney since Jason was on crutches. It is a good thing Whitney is in law enforcement because we had a cruiser pull into the alley a little concerned about what was going on with the exposed painted belly and me lying on the ground. Springfield does not see a lot of this on most Saturdays. Jason was standing there with some of her clothes and his crutches and though it was very funny. For the wooded scene—anybody who knows me is not surprised to see me pull furniture out of my vehicle for props and take into wooded areas but this entire set-up was ALREADY there!!! We had a great time and I’m so happy that they love their pictures. Best wishes to this very sweet and strong couple. 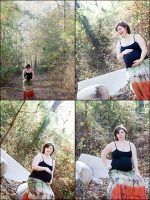 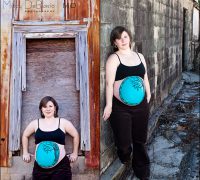 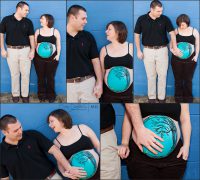